Why surprising?  Because it looks like a typical romantic comedy, yet with a sharp, intelligent script written by director David O. Russell and fine, award-worthy performances you end up with a beautifully funny, honest look at the human condition.

Russell has become a master of subtlety and realism.  Like in The Fighter, he puts very non-Hollywood characters on the screen.  These are real people.  Broken, vulnerable, strong, generous, manipulating, etc-etc.  This is what life looks like–messy.

And although some may argue that his direction is little more than “point and shoot”, they’re missing his careful craft.  The decisions Russell makes are the reason this does not fall into the typical rom-com formula.  He is not afraid to linger on the ugly stuff and he knows how to build characters.  As someone who has first hand knowledge of mental illness, I appreciated how Russell handled the subject–he never turns it into melodrama or theatrics.  Well done.  Silver Linings Playbook is perfectly written and directed–Russell deserves any and all accolades heading his way and he may have, again, guided actors to award glory.

Let’s start with Bradley Cooper.  He is a revelation.  I’ve liked him since Alias (Will Tippin  shout out!) and have enjoyed following his career, but this is the fulfillment of his potential.  I knew he had it in him! Cooper plays a man, who is NOT a catch–he is tormented and scarred and you still want to cheer for him.  That is largely due to Cooper’s charm.  This guy is a star.

And now for the lovely Jennifer Lawrence.  WOW!  She is incredible.  She blew me away in Winter’s Bone and I knew then, that she was a force to be reckoned with–boy, I was right.  There are several scenes that she had me spellbound.  It’s amazing that someone who is so young can emote such strength and confidence that is also laced with pain and longing.  This girl is a star.

Add an amazing supporting cast–Robert De Niro (best performance in a while), Jackie Weaver (not evil this time, but still awesome), Chris Tucker (he can act!?) and two great character actors that get some well deserved screen time–Anupam Kher and John Ortiz–and you have a strong assemble that only enhances the story. 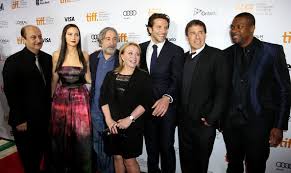 I can go on and on–but you know what I am going to say–I want to enjoy this all on your own.  You are in for a wonderful slice of life–you will laugh and cry and hopefully learn something from the experience.

Damn!  Django Unchained is awesome.  I will preface this with a clear disclaimer–if you do not care for or do not like Quentin Tarantino‘s body of work–this is NOT the film for you.  It is bloody, ultra violent, truthfully disturbing, and brutally honest about slavery–all the while, being funny and extremely entertaining.

That is Tarantino’s secret–he creates entertainment, while also making you think, feel and respond to his art.  And it is art.  He is a master storyteller and is getting better with age.  I thought Inglorious Basterds was brilliant and quite possibly his masterpiece, but now I am leaning on giving that title to Django.   Quentin’s style is unique and on full display here–clever, witty dialogue, zoom close-ups, slow motion moves and exaggerated violence (trust me–when he gets truly violent, you know it–it gets quiet and personal).  He also continues in allowing his characters to become bigger than life–never quite caricatures but they are all LARGE.  And Django is that–a new iconic figure.  He also makes the pre-civil war age come to life.  The imagery is vivid.  You can almost taste the dust and feel the bitter cold–very nice. 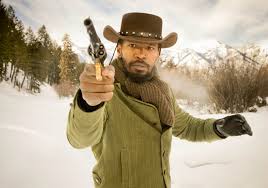 Jaime Foxx is Django.  Perfect, in every way.  A defining role, for sure.  He carries Django with pride and bravado, but also as a man who knows fear and loss.  Christoph Waltz has given me one of my favorite characters on-screen!  This reminds me how incredible he is as actor–as much as I hated Col. Hans Landa, I loved Dr. King Schultz! Loved everything about his performance–subtle and nuanced.  Of course, Samuel L. Jackson delivers and again, creates a memorable character.  Then there is Leonardo DiCaprio–why did it take so long for him to work with Tarantino?  Because…wow!  Leo is truly despicable–a horrible human being–and he sells it!  Brilliant.

That leaves the story.  Tarantino has created an homage (or as he would say, “he stole it”) to spaghetti westerns and black exploitation films.  Mixing them up to together into a new genre on its own.  The soundtrack is full of modern music and the style is unique, it is hard to define–except as AWESOME! 😀   Yet, I have to praise Tarantino’s bravery when addressing slavery.  It may be getting some negative comments due to his extensive use of a certain ugly “n” word–yet, it was the truth of that time.  I have not seen such an honest depiction in years.  It makes you uncomfortable and sick–as it should!  And then it plays out a fantastic revenge scenario that you only wish, was what could have happened.  So, kudos Quentin.  Clever way to truthfully use a time of our history (ugly as it was) as the background and motivation of an original American hero–Django.  Thanks.

So, I am going to call it–This MAY be Tarantino’s Masterpiece–may be, because who knows what he will do next!  But, I am pretty sure it’s going to be good.