Maybe it was underwhelming because I’ve read the book.  I am not completely sure, yet while Yann Martel‘s novel Life of Pi, was able to truly explore faith, religion and human nature–I felt like Ang Lee‘s film rushed through most of the abstract themes and ended up being a beautifully illustrated, interesting story of survival–that was neither spiritual or emotional.

Visually it is stunning.  Not sure how much is CG (it seems like a lot)–but either way it is spectacular.  The rendering of the animals is very well done–although, there were a few “fake” looking moments, it was not enough to ruin anything.  The acting by the three young actors, who play Pi, are strong and suit the role.  Yet, I did not ever feel connected to Pi or the tiger–I was ready to shed some tears that never materialized. 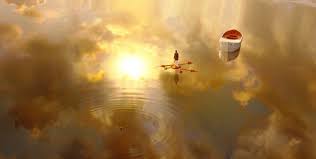 Lee’s direction is adept and he weaves a captivating story–but he allows for too much exposition in some areas and for me, it took away some of the power.  I felt this to be the true with the ending–it was the ultimate “let me explain this…just in case you do not understand”.  Storytelling, at its best, allows for the audience to form its own opinions and should not result in spoon-feeding all the little details.  I guess they thought it would be too confusing.

Bottom line, I loved the novel.  I was taken on a journey of self-discovery and faith.  With the film, I almost felt cheated.  Lied to.  Weird, I know.  Instead of being a story that would make me believe in God–it ended up being a film that made me believe in the magic of cinema–not bad, but not the experience I was hoping for.

Side note:  Life of Pi  won 4 Oscars last month and I could not be upset or happy because I had not watched it.  Now that I’ve seen it, I must say that I have some issues with the some of the wins–especially for the Best Director.  Yes, it was well done–nicely paced and seamless F/X–but in 2012 there were several directors (Affleck, Tarantino, Anderson, etc.) that deserved it more.  (Just my opinion.)

8 thoughts on “Life of Pi is interesting and beautiful, but doesn’t quite resonate…”