You know what to expect if you are familiar with this franchise and this latest installment will NOT disappoint.  Fast Six is a fast, fun, popcorn-eating  summer blockbuster!  Low on realism and high on fantasy.  I dare say this is summer movie greatness.

Okay.  I must admit I love The Fast and The Furious series!  LOVE IT!

All of the films–(except for 2Fast 2Furious and 2Horrible -_-)–are a total adrenaline,  fun-filled rush.  Maybe, it could be my love of American muscle cars (yeah…they’re awesome!)–my love for creative action sequences and fist fights–or maybe my love for Vin Diesel’s voice…hell–my love for ALL of Vin Diesel!  (And yes.  I can’t wait for Riddick!)  So for many reasons I was giddy and bouncing with excitement about The Fast & Furious 6.  I knew it was going to be silly, unrealistic and corny–but I also knew it would have playful, humorous banter, badass action and beautifully orchestrated car stunts (Lin has some serious skills!  Can’t wait to see what he is going to do next…).  Yeah.  Giddy as a schoolgirl.

Director Justin Lin‘s last addition is a fitting farewell to the characters and universe he helped to establish.  The story brings everything full circle.  You have the complete arch of all the characters and in a way, it kind of ends Lin’s tenure and leaves it open to start a new chapter.  I love that this started as an underground racing film with some stiff acting and cool premise and now it has grown into a half way decent adventure for these characters.  By Fast Five they were in  full-blown heist mode and now in F&F6 it comes back to family and what’s really important.  Besides fast cars.  😀 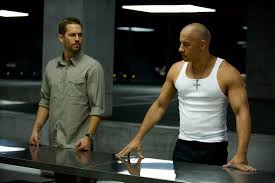 Diesel is the heart of this franchise and he wears Dom Toretto like a comfortable jacket.  Stoic and quiet he is the leader of this band of drivers and everyone else bounces off  his presence.  Paul Walker grows up a bit in this one and seems to bring O’Connor to a  maturity lacking in the others.  It is nice to see Michelle Rodriguez again and I even liked how they brought Letty back.  Clever and effective.  As for the crew, my favorites are Sung Kang‘s Han (always) and Gal Gadot‘s Gisele and they bring this doomed pair to a satisfying conclusion.  And of course, you have The Rock and newly added Haywire’s Gina Carano (she is incredible and facilitates some cool girl fights…) who make a dynamic fighting duo.  😀

I will have to give F&F6 the best villain award.  Luke Evans is perfect as the baddie Shaw.  I am excited about this because I have watched Mr. Evans career since seeing him in several, not so good films (The Raven–Three Musketeers) but enjoying his performances.  I am happy to see him shine in this.   I loved that they did not make him a mad, rash psychopath–but a controlled, calm psychopath–which is much more fun.   Make sure you stay after the credits to see a sneak peek at baddie for #7–very promising.

Bottom line?  It’s fun.  Period.  Yes, there are “yeah, right” moments and “No, that would never happen”–but if you are sitting in that chair watching a Fast and Furious film–you have to know that is part of the package.  What I love is that this series has NEVER taken itself seriously.  This is meant to be badass and frivolous fun.  And you know what?  That is how I like it.