Really.  I am conflicted with Man of Steel.  Although there are a lot of things done right with this latest reboot of the Superman story–there are also just as many things wrong.  The more I discuss it with people–the more I find myself praising and criticizing the film at the same time.  “I liked this…but I hated that…”  Round and round we go.  Anyways, I will try to make sense of it for you guys and again, you know I will not divulge any particulars so you can experience it on your own.  Here we go…

The Praise and the Criticism–they go hand in hand.

1.  The origin narrative.  I was stoked the first quarter of the film–I liked the Krypton prelude (ran a bit too long though) and then the flashes back to childhood while we follow Clark becoming an urban legend (very cool premise–again–wanted more along that vein).  Screenwriter David S. Goyer is a well-known fan boy and I liked the approach of showing how hard it was for Clark to grow up being “special” and how scary and overwhelming it would be to come to terms with all of it–especially when he was just a kid.  This is where Kevin Costner shines.  As Pa Kent, he is the emotional center of the film.  BUT….there were too few of these scenes.  I would have gladly traded a bloated fight sequences (more on that later) for more time with Clark and his human family, as well as the people he affected–I would have cared more for ALL of them if that had been the case. 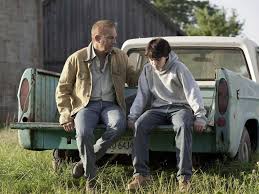 2.  Henry Cavill.  Cavill definitely fits the part of Superman.  Physically, he is a perfect fit.  As an actor he is charismatic and although imposing in size–he is capable of seeming gentle and kind (an important aspect of Superman’s nature) and I can see him grow into this role.  My problems with him are not really his fault.  I blame Goyer’s script.  Cavill does not have much to work with.  I thought we could get to see his internal struggle–thought we could see him build relationships with humans on his travels–something other than what we already know.  Nope.  Ends up being flat.  And I know Superman can be a stick in the mud sometimes…but c’mon!  Can we have some levity?  Some jokes?  (I miss you Chris Reeves! :()  It sure would have helped us connect with him. 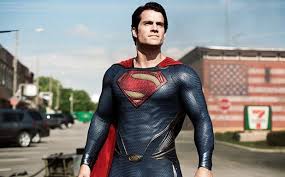 3. The script.  This thing was full of exposition!!  Two thirds of this is talking about stuff that already happened–to explain–because we had to fill up with so much action we have to tell you the stuff you need to know.  Boring.  Show.  Don’t tell.  Isn’t that storytelling 101?  The worst crime is the lack of character development.  Every single one is shallow.  With this top-notch cast it is a shame that they have no chemistry–and I believe that comes from the underdeveloped writing of their characters.

4.  The visual.  It sure does look pretty (shout out to cinematographer Amir Mokri).  And Zack Snyder can direct action.  He has a clear sense of style and this film has his fingerprints all over it (quick double zoom!).  The costumes and CGI are all pretty cool–loved all the Krypton design.  While the flight sequences are beautiful and their power is palpable–(you can almost feel the air rush past you)–the action sequences due tend to become heavy-handed.  There was a lot of action.  A LOT!   And if the sequences were unique or creatively orchestrated maybe they would have kept me engaged–but, it was all too familiar.    Especially the last quarter, I was ready for the destruction to stop.  😀  But, then I enjoyed the flying fist fight–very cool–for the first 5 minutes…  -_-

5.  The AWE factor.  Where are all the people?  The running theme throughout was how humanity would react and respond to the discovery that there is an Alien among us and guess what?  The reaction?  Well, there isn’t any.  NONE.  We don’t get any of it.  Not the “It’s a plane!  It’s a bird!  NO! It’s Superman”  classic line…not the “WTF?”  reaction…not the “Holy crap!  You’re flying!”   Nothing.  And that “awe” factor is important and an intricate part of his mythology.  Superman is humanity’s protector–right?  And yet, we do not see anything about them until towards the end–when a family of four is used as the representation for all humans and then they literally vanish.  Not even a “thanks-strange-man-in-a-cape-with-god-like-powers-for-saving-our-lives”–Wow.  Rude.

6.  The cast.  Costner is the stand out here and I truly hated how they concluded his story line–illogical and just plain dumb.  But, at least it was nice to see him back to form.  Diane Lane has one great scene with a young Clark–after that she fades in the background.  Russell Crowe is a force to be reckon with as Alien daddy Jor-El and I believed his convictions–Strong showing, for sure.  Amy Adams is a strong, modern Lois Lane–even though I still have issues with a reporter being present in all the scenarios that she is present for.  I like her okay, but do not believe the forced, rushed “love” story with Clark/ Kal-El–it left me wanting.  Laurence Fishburne is an afterthought as Perry, as well as the rest of the Planet staff (who is that again? I asked during a climatic scene.)  Michael Shannon is a good villain.  Good, not great.  I appreciated General Zod’s new-found purpose and focus and I think that while subdued in performance, Shannon is able to portray intensity with only his eyes.  You can see his madness.  Well done.  Oh!  I also loved the badass supers as henchmen.  😉

7.  The future.  Okay, Christopher Nolan‘s influence can be felt here–the dark/gritty feel to the universe–but that is about it except for his power to expand the Superman world.  I know that a sequel has been green lit and the rumors of a Justice League begin to form again and this is where I dare to get hopeful–there is enough here to work with–if they can enrich the characters–flesh out the universe–maybe a JL film will finally be possible.  I will keep my fingers crossed.

So, as you can tell, I can not hate Man of Steel, but I can not ardently love it either.  It is a better Superman than the last attempt and the potential seems greater than before–that in itself is a good thing…BUT…yeah…I will probably never watch this one again.

Until next time!  Later!

PS– I should state that I like Superman.  I grew up with the 70s films and loved the Justice League animated series, but in the greatest showdown between the Alien and Batman?  Yes.  Batman always wins.  Hell, I wanted to BE the Batman.  Really.  True story.   :p