This is Vieve here–Nedi’s daughter–to keep you updated with films that sometimes my mother is just too busy to watch. 😀    Or films I do not care to see…  😉  I will call these posts Vieve’s View on…

hopefully, it will help fill in some film gaps.  Thanks, baby girl!

Finally we were able to watch Jack The Giant Slayer.  Sure, it didn’t look like the greatest movie, but it seemed like it could be fun! (Also, Ewan McGregor looked NIICE :P) Well my mom completely passed out–that should tell you something–and my best friend and I were left alone with a crappy movie.  The beginning of the film looked great visually and story seemed promising.  There were plenty of beautiful scenes and the animation/graphics were well done and they connected to the story to help it flow.

Then they fast forward and you are thrown ten years into the future with characters that are not very well-developed and that then seem to fall flat.  Even my weakness for Bill Nighy‘s voice or McGregor’s excellent armor–and great hair–and plenty of suave acting could salvage the film.  The film is very predictable, as we might have expected–and all though the film is one full of adventure, the typical obstacles, the typical conclusions, some cool graphics, a typical Hollywood romance, and of course plenty of action–in the end, I got all that I was expecting but the key ingredient was missing…character development. 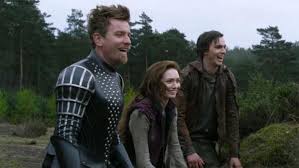 I couldn’t care less for any of the characters–especially for Jack.  Nicholas Hoult is a fine actor but this role does not allow for much and has no real arc or growth .  Now, for the villain.  Wait.  Is there a definite villain?  Like my mom says–a villain can make or break a film and in this one it is broken.  Okay– another  big issue I had with the film was the ending. What was the point? Who is the boy? Why?

I understand what Jack The Giant Slayer was trying to do– a fantasy adventure romance– but where Matthew Vaughn executed that idea perfect in Stardust , unfortunately director Bryan Singer fell short.  (Real shame, Singer has yet to come back since X-Men…I hope he finds his groove again–soon.)

A little part of me wishes I would have just fallen asleep and cuddled with my mom–she enjoyed herself the most, I dare say. Yet, I am glad I stayed up–I was curious about Jack The Giant Slayer and now I know.   Disappointment.  So, if you are curious?  Be warned.  Proceed at your own risk.  😀

Well, this was fun.  I will be back with some other reviews.  Bye!