OMG!! I haven’t laughed this hard since the original Hangover!  Yeah…really.  Truth.  From beginning to end, I laughed out loud.  Now, yes this is raunchy, vulgar, gross (at times) and there is  flat-out craziness–and yes…I loved it!  I’ve already seen it twice (that tells you a lot) because I had to take my daughter, Vieve right away so we can share in the awesomeness (She loved it just as much ;))

The premise is clever.  A group of friends are facing the end of the world.  (What kind of end?  I will let you find out. :D) These group of friends just happen to be actors–and these actors are playing thinly veiled versions and parodies of themselves.  First of all–how cool of them to be willingly to have fun with their images–and from what I read in some interviews they took true and real aspects of their personalities and then twisted them, one way or the other, to suit the story and propel the comedy.  It is a creative and very effective idea.  This group of friends  just also happens to be hilarious–all of them have perfect comedic timing and can bounce of each other even in the littlest ways.  Watching them interact is part of the fun! 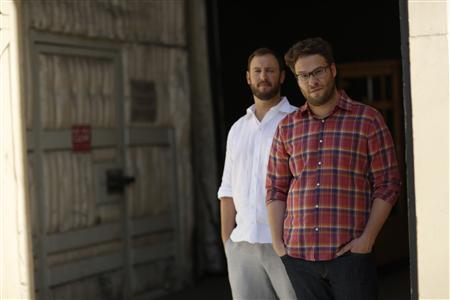 Written and Directed by Seth Rogen and Evan Goldberg (based on a short Jay and Seth versus the Apocalypse) the narrative is simple.  Yet, in simplicity they are able to touch on a variety of human emotions–fear–anger–jealously–rivalry–love–respect–honor–etc–and all in the wildest way possible.  LOL!  I was impressed by how well it was constructed and how the quick pacing kept it from going over the top.  Oh! The CG effects are also awesome and a surprise since I did not expect any.  😀

There is so much to say!  And yet…I can not.  I do not want to give a single solitary thing away.  I will say a few things:  I am now an even bigger fan of Jay Baruchel (and my daughter is now crushing on him ;)).  James Franco is fantastic.  Danny McBride is insane!  Jonah Hill is a trooper.  Craig Robinson is one cool dude.  Seth Rogen is everyone’s favorite.  Emma Watson is indeed a badass.  And Michael Cera?  LMAO.  Wow.  I will never look at him the same again.

I can go on and on.  There is way too much awesomeness for one post!  LOL.  But, I will end by saying go check it out!  You will laugh.  A lot.  And I kind of forgot how good that feels.  Laughing is good.  Really good.   Go get you some.  🙂