Yeah–I said it–IM3 ROCKS!!   Big time.  Welcome Summer of  2013…and what a start!  Marvel Studios did not disappoint and honestly, after the hugely successful and popular Avengers this could have been less than just because how could it compare to such awesomeness?  But, that is not the case, at all.  Under the direction (and co-written by) Shane Black, both Tony Stark and the series enter the realm of greatness.  It has all that is best about the Superhero universe–a troubled hero–check, a fantastic villain–check, humor/fun quota–check  and awesome badassery–double-check! 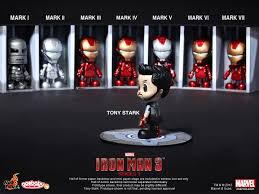 We must begin with Robert Downey, Jr. and his brilliant (continual) performance of Tony Stark.  If ever an actor and character were meant to be–it is these two.  Wonderful.  I enjoyed every second.  His perfect comedic timing and superb delivery is not wasted.  Yet, RDJ  is also allowed to really shine dramatically, too.  Realistically disturbed and haunted by the events in New York while with the Avengers, Stark is more human this time around and forced to deal with his frailty and many of his other issues.  I loved this approach and was pleased with the arch that shows real growth and potential for the character. 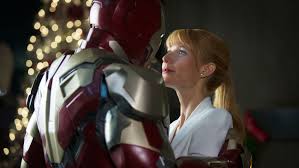 And as I’ve said before, a supporting cast can help elevate a film and the IM universe is a well oiled machine (sorry, couldn’t find another way to say it :D).  Gwyneth Paltrow is perfect as Pepper Potts, again and her chemistry with RDJ is so easy and strong, that it is a pleasure to watch them.  Don Cheadle is solid, as usual and had some great moments.  Jon Favreau (director of 1 & 2–ex producer of 3) was generous to show up and proved he is a cool dude.  And I can not leave out Paul Bettany as the voice of Jarvis and all the suits–I love him!  This time around they really focus on the relationship between Stark and the suits–and how they are an extension of who he has become–and I thought exploring this aspect of the ego was a smart touch.   (Side-note: I must confess–I love the robot guys (fire extinguisher one–heart) and they have a great moment.) 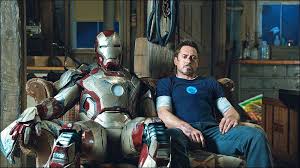 Now, on to the villains–who can make or break any film–but especially a superhero film.  Well, this is the splitting point for many.  I am not a comic book reader–so, I will not be able to feel disappointed– I came in without expectations and totally enjoyed the villains here.  Sir Ben Kingsley is wonderful as Mandarin–his performance is strong and pleasantly unexpected.  Guy Pierce’s Aldrich Killian is fantastic!  This guy is good and he is having a blast.  Chewing up scenery like crazy!   I also like Rebecca Hall, yet her character was the least developed and seem like an afterthought.  But we did have some henchmen with swagger and that is always fun–nice job, James Badge Dale and Stephanie Szostak.

The most pleasant surprise for me was Shane Black’s direction.  Known more as a screenwriter, I was not sure he could handle the amount of action required for these big summer films–but smartly, Black scales down the over-the-top sequences and somehow is able to make it feel grittier and real.  Bringing Stark to earth allows him the opportunity to present the action with a fresh angle.  Well done.

What else can I say?  I laughed.  A lot.   I was choked up, in parts.  I was awed and impressed.  I left bumped and ready to watch it again.  So, yeah…it rocked!  My favorite of the series–hands down.

Okay.  I am a geek.  I know this.  I am proud of it actually.  And The Avengers is a geek’s wildest dreams come true.  Throughout I found myself saying things like–OMG! That’s awesome!–That was so badass!–That’s so cool!–Holy Shit!  Wow!  Yeah…it is that good!    The best part?  Everything.  Yet, I am going to say that the master behind this is Joss Whedon, who takes these distinct characters and allows each to shine and then weaves them together to create an outstanding universe.  There are tons of quotable lines and memorable scenes and this is the first film of the year that I want to see again and again.  Bravo!

Let us also acknowledge that this movie is an accomplishment–four different comic heroes, stars of their own movies, joining forces to save the world.  Having that many egos to contend with must have been a daunting task, yet Whedon makes it look easy.  He is able to strike the perfect balance between character development and story with badass action and comic book sensibilities.  Then in true Whedon style he adds plenty of humor and unexpected depth and heart.  The Avengers is a true crowd-pleaser that also maintains the integrity of each superhero, but never forgets to have fun with it.

I enjoyed all the Marvel movies (Iron Man 1& 2, Thor, Captain A, and even The Incredible Hulk) that were building up to this release–some more than others (Captain America was my favorite and I believe the best film of the bunch), but they were all entertaining.  The Avengers takes entertainment to the next level.  It never forgets what it is and what the fans expect and want–that’s what makes it brilliant!

Robert Downey, Jr takes the helm and delivers some of the best lines in true Tony Stark fashion.  Downey is always a pleasure to watch and has his character down to a science.  Chris Evans is wonderful as Captain Steve Rogers and is the true leader of the group–he represents what a true hero should be.  Chris Hemsworth is a more mature Thor this time around and it works.  Thor is on a mission to save his brother, Loki (played perfectly by Tom Hiddleston) who really is just a puppet for a greater evil and threat.  But the best surprise is Mark Ruffalo as Dr. Bruce Banner and “the other guy” aka the Hulk.  The only actor not proven in the role, Ruffalo was a risk–a risk that paid off!  This is the Hulk I’ve been waiting for!  He is a shy, nervous genius and yet, there is something behind his eyes that makes him dangerous–perfect. (As an avid Hulk TV show watcher I can say…I’ve missed you Dr.Banner.) And for those that may doubt it–do not underestimate the power of HULK SMASH!! 😀

Let us not forget the straight humans in the bunch–Scarlett Johansson‘s Black Widow is a complete badass!  She has some pretty cool moves and no super powers, which is even more impressive.  Jeremy Renner as Hawkeye is smooth, commanding and formidable.  And of course, there is Mr. Samuel L. Jackson as Fury and well…it’s Samuel L. Jackson!  Enough said.  Finally, I want to give a shout out to under appreciated Clark Gregg as Agent Coulson (“Phil? His first name is Agent.”) who has been the one connecting character in all the movies.  Coulson continues to be one of my favorites and gets some great moments here, especially his interactions with Cap, which are classic.

The special effects are well done and never distracting.  We are given some pretty cool aliens and creatures, but I was most taken by the Hulk (yes, again) who finally looked real!  The plot is pretty straightforward and there are no surprises about who is going to triumph, but that is not the point of this film.  This is a story about how these very different characters become a team.  How they learn to trust and respect each other.  Bottom line though?  The Avengers is meant to be a fantastic escape from our daily lives and guess what?  That it is!

Sherlock Holmes: A Game of Shadows is in fact a bit better than the first installment.  It still has the awesome chemistry between Robert Downey, Jr and Jude Law (which is the # 1 reason to watch).  The unique directing style of Guy Ritchie.  And this time, I did not figure it all out in the first 30 minutes (it was pretty predictable first time around).  I enjoyed myself a lot.  It was pure entertainment–which is exactly how I felt about the first one–even with its faults.

Yet, with Game of Shadows they have the added a wonderful adversary with Professor Moriarty–who Jared Harris plays perfectly.  Some of the best moments are not the action or fight sequences–although still cool–but the mental chess match between these two brilliant minds.   I also like Stephen Fry as the “other Holmes”–Sherlock’s big brother.   The only disappointment was the under use of Noomi Rapace.  They did nothing with her character–they did not even give her a personality and that was a shame.

Overall it was fun and well executed.  I love Robert Downey, Jr and he seems to love playing this part and that makes it a blast to watch.   I do not judge these movies as true Sherlock Holmes–but as blockbuster films made with a Sherlock character–and there is nothing wrong with that.

Side note: If you want to experience the real deal watch the BBC TV series Sherlock–that will forever be my Holmes standard now.   It is absolutely brilliant!